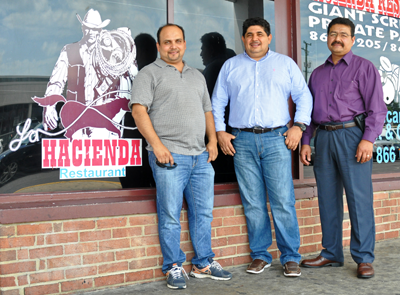 One wet weekday evening in May, two dozen Salvadoran immigrants found their way to a restaurant in a Virginia suburb of Washington, D.C. They weren't drawn there by the pupusas or the cumbia rhythms. They had come to learn from Andres "Elmer" Arias and his like-minded associates how to help their families and friends back in El Salvador.

Arias arrived in Washington, D.C., from El Salvador in 1980, desperate to escape the civil war. He was broke, just 19 and spoke no English, but he managed to find a job cleaning bathrooms and washing dishes. Fifteen years later, he opened his own restaurant in Fairfax, Virginia, the first of two. Along with friendships formed on the job and on the soccer field, his enterprises allow him to channel energy and resources into binational efforts that benefit communities in the United States and El Salvador. As someone who avoids the spotlight, Arias was caught off-guard in 2012 when the White House honored him as a Champion of Change for organizing Futbol Positivo, whose three soccer leagues give young people in northern Virginia the opportunity to play the game in an environment that encourages them to stay in school and to reject the lure of gangs and drugs. The Fairfax Police Department credits Futbol Positivo with contributing to a 65 percent decrease in juvenile delinquency over a three-year period.

But Futbol Positivo was just Arias' most recent launch. For years, he has been collaborating with other Salvadorans to raise funds for communities in El Salvador. After Hurricane Mitch hit Central America in 1998, Arias coordinated a massive drive that not only resulted in the delivery of food, clothing and other supplies to Salvadorans devastated by the storm but also informed the diaspora's response to subsequent natural disasters. In 2001, he founded the Salvadoran-American Chamber of Commerce, whose first initiative helped a community in El Salvador get started on organic production. Seven years later, he successfully incorporated Fundaci6n para la Educaci6n Social, Econ6mica y Cultural (FUPEC) in the U.S. and El Salvador. The ground­ breaking nonprofit organization, now an IAF grantee, helps hometown associations of migrants (HTAs) in the United States and residents of their respective communities of origin pool resources and invest in development for long-term results. Thousands of Salvadorans who, like Arias, are determined to maintain ties with and assist people back home are members of the 90-some HTAs currently affiliated with FUPEC-almost half the Salvadoran HTAs in the United States.

A median age of 23.9 puts El Salvador among the youngest countries in the hemisphere, and its young people have been a priority in the diaspora's development effort. Salvadorans in the U.S. are conservatively estimated to number 1.5 million and most left home at an early age, like Arias did. Many working through FUPEC want young men and women back home to have what they did not: a future there, in El Salvador. They see a role for their financial support but the challenges are daunting: 35 percent of Salvadorans are poor and, according to the International Labor Organization, some 24 percent of those between the ages of 15 and 24 neither work nor attend school. The situation is compounded by the legions of undereducated, underemployed youths in the ranks of gangs that had substantially contributed to a national murder rate of 69.1 per 100,000 in 2011 and a toll of disproportionately young victims. Until a truce that went into effect last year significantly reduced the number of homicides, El Salvador ranked as the second most violent country in the hemisphere, behind Honduras. Everyone, from the gang leaders to the Salvadoran president agrees that education and employment are crucial to a future of peace and a way out of poverty.

Even before FUPEC became fully incorporated, the Pan American Development Foundation (PADF) and Banco Agricola, El Salvador's largest bank, approached Arias about partnering to improve educational opportunities in El Salvador via a joint venture called Manos Unidas por El Salvador (Manos Unidas). The plan called for FUPEC to structure the program, identify potential U.S.-based HTAs as participants and administer a pool of resources. FUPEC developed rules requiring Salvadoran communities to compete for awards via detailed proposals that commit the applicant and its respective HTA each to contribute 15 percent of the cost of their project while PADF and Banco Agricola cover 70 percent. Reina de Paniagua, FUPEC’s executive director in San Salvador, and her colleague, Engel Flores, are available to guide the applicants. "Raising consciousness tak.es more than a year," de Paniagua said. "An organization matures relative to the attention it receives." She cautions members of HTAs to trust the priorities of hometown residents and to let them take charge. Manos Unidas requires individuals from both the HTA and the community's committee to learn bookkeeping and the other basic skills necessary to provide an accurate accounting.

Since its launch in 2006, Manos Unidas has awarded more than 200 grants funding school infrastructure and scholarships in disadvantaged communities throughout El Salvador. San Julian, in the western department of Sonsonate, offers an example of how collaboration with an HTA gets started and what it can achieve through the program. Jose Mauricio Gallegos, just 18 when he left San Julian to flee the civil war began traveling back to his hometown in 1996. The poverty so tore at his conscience that he eventually gathered 10 friends in Virginia, founded the HTA Comite de San Julian and has served as its president since 2000. The HTA's affiliation with FUPEC and its subsequent participation in Manos Unidas resulted in an investment of $55,000 in classrooms, a computer center, a multipurpose room and a soccer field in San Julian. Of that amount, FUPEC disbursed$25,000 and residents convinced their local government to provide another $30,000. "It's a dream come true to give back to the same schools where I studied and help the children of today," said Gallegos.

Success with Manos Unidas has inspired FUPEC and its HTA associates to focus beyond education. An IAF grant of$286,485 awarded in 2011 is helping FUPEC and its affiliated Salvadoran communities invest in development. To date seven grassroots groups from throughout El Salvador have received funding conditioned on the HTAs and their respective hometowns' mobilization of40 percent of the resources required while the IAF contributes 50 percent; and FUPEC raises 10 percent from other sources. Most of the successful applicants emphasized young people or agriculture. The proposal submitted by a cooperative in Santa Marta, Cabañas, a community 90 kilometers from San Salvador combined both priorities. Its farmers, all between the ages of 15 and 30, cultivate organic produce, raise tilapia and make organic fertilizer. The cooperative has invested its award in a multipurpose center; an electrically-powered system that irrigates crops consistently, making them less vulnerable to fungi and bacteria; and in training in business skills. According to Moises Lopez, 28, a member of the coordinating committee, the farmers now keep records and a balance sheet, so they know if they are turning a profit; they understand the vah.ie of reinvesting some of their earnings. Partnering with another cooperative has resulted in better prices.

"As young people, we like to relate to others our age, so we joined the cooperative. We see that young people can do this work," said a young farmer who identified himself as Santos. "We've improved our production, our work place, our group and the entire community." When Grassroots Development visited, young men and women were filling trays with seeds for fertilization, snipping ripe jalapenos and clearing one of the cooperative's four greenhouses for the rotating detoxification period. Workers step into a pool before entering a greenhouse, to rid their shoes of contaminants. The young men who founded the cooperative say the incorporation of more young women as members makes for a more orderly workplace and more careful handling so produce is less likely to become damaged. Weekly shifts are staggered because many members still attend school or work on family plots. Security is a concern; duties include night watch, recently facilitated by electricity that powers flood lights, thanks to FUPEC. Many members see the cooperative as the key to a livelihood in Santa Marta and are determined not to follow in the foot­ steps of relatives in the United States. For Francisco Ramirez, who works several jobs in metropolitan Washington, D.C., and heads the HTA Comite Santa Marta, the progress mak.es his investment of time, energy and resources worthwhile.
An unexpected consequence of the IAF's grant to FUPEC has been the elevation of the committee in the community of Santa Teresa to Fundación Santa Teresa, a brand new IAF grantee that will use its IAF funding to involve diaspora Salvadorans in efforts to improve agriculture. Federico Espinoza, who has lived in northern Virginia since 1985, is president of the HTA Comite Santa Teresa that motivated residents to form the committee that initially helped the elderly. Now its longer-term vision is to prepare young people to take advantage of local opportunities. "We're investing in their desire to work, we're pushing our communities forward together." said Espinoza. "This is development that is happening. It's beautiful to see." 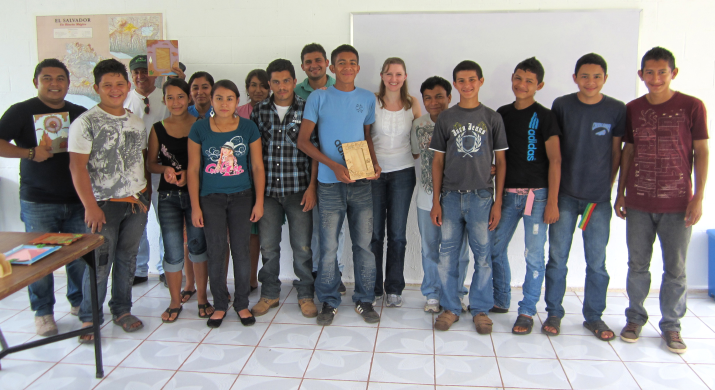 In addition to Salvadorans, Elmer Arias has mentored Hondurans, Guatemalans and Peruvians who want to organize hometown associations supporting their communities of origin. "Surround yourself with others who share your mentality," he advised them. Certainly that describes Espinoza, Ramirez and Gallegos, men who also share his narrative and respect his tireless efforts on behalf of Salvadorans in two countries. As the conduit channeling considerable resources from donors to recipients, Arias also comes under dose scrutiny and has had to learn to manage criticism with grace. "I need to feel 100 percent sure that everything has been done right, and then keep on working," he said. "The acts speak for themselves." He admits that the pressure has nearly made him give up. But, he said, "If I do, thousands of families will be left without help when they need it."
In 2011, the most recent year for which figures are available, the diaspora sent $3.6 billion to El Salvador; remittances sent worldwide were estimated at $372 billion. But for years, working migrants abroad have been sending home whatever they could afford, often at considerable sacrifice, resulting in a volume of cash that has held together the economy in developing countries around the globe. In the early 2000s, when this financial flow attracted the attention of the foreign-assistance community, it provoked optimism that some benefit of these resources could be channeled beyond individual households. Often arrangements proposed toward that end were met with failure because the parties underestimated, or totally ignored, the complexity of the interaction among HTAs, the communities and the nonprofits or government agencies brokering the project. FUPEC took a different course, through the grassroots, patiently cultivating relationships as organizations matured. What resulted was an important breakthrough, allowing Salvadorans in the diaspora and in El Salvador to maximize their support for young people, so they take charge of their future. Other diaspora communities may learn from FUPEC‘s pursuit of development.